When Hurricane Harvey struck Houston in August 2017, Jane Henry, her husband and two young daughters were left stranded in their flooded home.

"Our house was wrecked. We lost our clothes and our cars," recalls Henry.
Volunteers helped them in the immediate aftermath of the storm. "But after that we were on our own," she said.
So for the next four months, Henry donned a pair of construction gloves and started filling up dumpsters with debris from inside and around the house.
Physically, she was prepared for the work. Henry, who is now 41, was a Division 1 golfer at the University of Arkansas and had stayed in shape since.
It was the gloves that let her down. 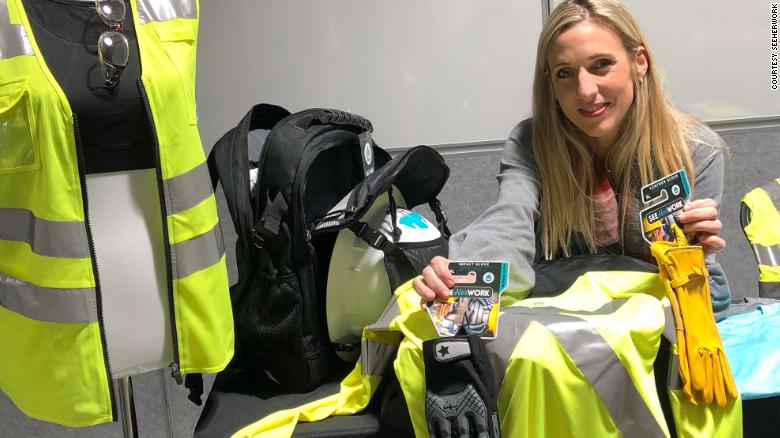 Jane Henry, founder of SeeHerWork.
"I tossed a large piece of board into the dumpster and one glove went flying off. My hand slammed between the board and the dumpster," she recalls.
The gloves, which she bought from the local hardware store, were the correct size. But because they were a unisex cut, there was still an extra inch of space between the tip of her fingers and the tip of the glove.
As an athlete, Henry knew well how ill-fitting clothing or the wrong size equipment could impede performance. So she tore apart her gloves and restitched them to correctly fit her hands.
Other women started noticing her "customized" construction gloves when she would visit the hardware store and would ask where she got them.
That's when Henry realized there was a need for workwear made specifically for women in commercial, industrial and emergency response jobs, like plumbers, electricians and EMTs.
"What's available right now is unisex workwear, but it's really designed for men. This creates a safety issue for women," she says.
A few months later, in January 2018, she launched her women's workwear company SeeHerWork. 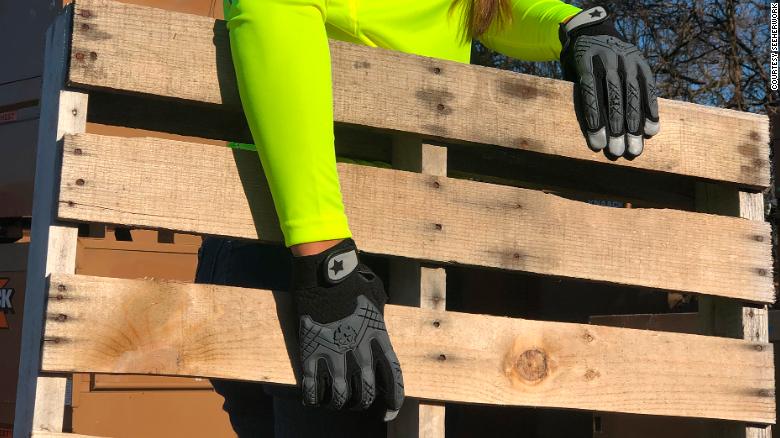 SeeHerWork designs and makes work wear specifically for women, including gloves to fit smaller hands.
Before she could get SeeHerWork off the ground, Henry spent months conducting focus groups with women workers and safety managers in order to create prototypes of various products. Those initial prototypes included gloves that fit smaller hands; workwear that fastens and buttons in the proper direction for women; undergarments that protect sensitive body areas from flying debris; and properly sized eye and ear protection, respirators, footwear, backpacks and fire resistant clothing.
She then teamed up with a product testing firm to test the efficacy of the prototypes and eventually lined up manufacturers in China.
Henry began selling her products online last September. Prices range anywhere from $29 to $145, depending on the product.
Initially Henry, who holds a business degree from Rice University and previously worked at consulting firm Accenture, bootstrapped the Houston-based business herself, investing $250,000 of her own money. She has since been able to raise another $200,000 through a convertible note funding round.
"We're only selling online for now but we do have a large hardware chain that is very excited about the products," said Henry. She hopes to have the SeeHerWork brand in stores sometime this year.

Lack of proper gear is an 'injustice' to women

Many of the women Henry spoke with told her that the improper-sized clothing and gear they were forced to wear on the job made them less productive, hurt morale and put them at greater risk of getting caught in machinery, or having some other type of workplace accident.
Vivi Rodriguez is a firefighter and paramedic with a large city fire department. "I'm not a big person at all. I'm 5 feet, 2 inches tall on a good day," she said.
Rodriquez said Henry is addressing a problem that women who work in male-dominated professions have been complaining about forever. "Every woman in a job that may be considered male-dominated wants to be recognized for the work that we put in. We can't put in 100% if we don't have all the proper tools," says Rodriquez. "Give me what I need to do my job and I promise you the job will get done."
For Rodriquez, finally finding a pair of gloves that fit her hands properly was a huge relief.
"The issue I've had with my other work gloves, and we wear gloves on every call, is that there was a lot of extra fabric at the tip of my fingers," said Rodriguez. "Not only did the gloves slip off, but because we work with water all the time, they would get heavy with water because they were loose and I would take them off. That's a safety risk and it's frustrating." 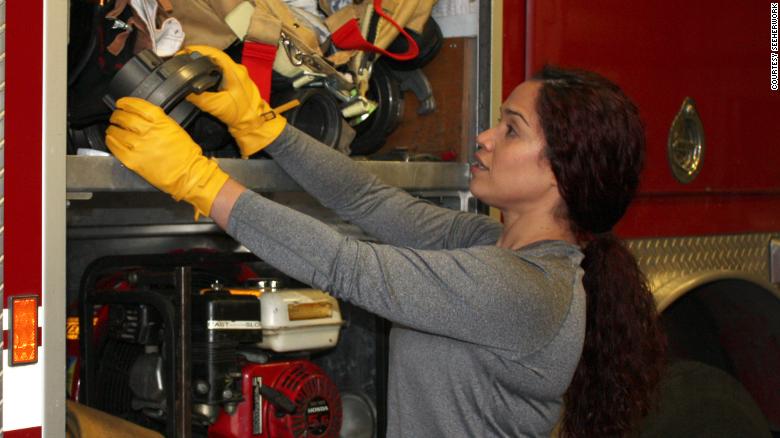 Vivi Rodriguez, a firefighter/paramedic with a large city fire department, wears SeeHerWork gloves on the job.
Not only does Henry believe the lack of proper gear is an "injustice" to women who work blue-collar jobs, but it also could be preventing more women from entering these fields.
"I want to save women's lives and I want more women to confidently enter these lucrative careers, properly equipped for these jobs," she says.
According to the US government, less than a third of all workers in the manufacturing industry are women, women represent only 12.5% of all workers in mining and oil and gas extraction work, and just 9% of all construction workers in America.
Earlier this week, Henry kickstarted a #SeeHerWorksocial media and live event campaign in Houston, where she invited local tradeswomen to share their job experiences and talk about opportunities for women in their industries.
"Women have gone decades without the right clothing and equipment to perform their jobs, and addressing this is the first step to fill empty labor positions today," said Henry.
Source: CNN.com

Thanks to our Advertisers

BIA of Central Ohio members can harness the power of the new BIA website with this advertising opportunity. Your ad will rotate with up to two other ads in your ad space for a total of up to three advertisers. BIA reserves the right to include BIA ads. BIA reviews all ads for content and reserves the right to decline ads containing objectionable material.  With approximately 3,500 visitors (2,630 unique visitors) and 8,900-page visits per month, you won't want to miss this opportunity. Contact the BIA if you want to increase your company's reach.